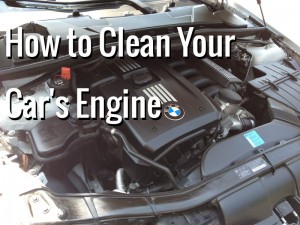 How to Clean Your Car’s Engine

If you’re considering selling your vehicle, it’s nice to get it detail cleaned. You can do it yourself or pay to have it done (up to you). Either way, make sure you get the engine compartment cleaned and you’ll get more money for your car. Anyone coming to look at your car and buy it will want to take a look under the hood to see what shape it’s in. If it’s clean and all the fluids are up to correct levels, then that’ll be an indication that the car was taken care of.

In this article, I’ll go over some tips and things to know about cleaning your car’s engine compartment.

I’ve had my current car since October but haven’t had a chance to clean under the hood yet. I live in Wisconsin, so it gets cool at the end of October and that lasts through April usually. This year, we’ve had a lot of rain so there hasn’t been much of a chance to do it myself. I’ve been taking my car to the good local car wash often enough (not as often as my black Acura I had – this car is silver, which is nice because it shows less dirt… I love that) and I had it detailed once but I haven’t had a chance to do it myself yet – and I like to do it, actually.

Finally, today, I got the chance to clean under the hood. A guy there saw me taking pictures under the hood and asked if I was selling the car. I told him I was doing this for my blog. I think he was disappointed. When people see others taking care of their car, that makes them more attracted to the car. Doing this work at a local self-serve car wash may actually attract some buyers – it did for me and I wasn’t even selling it!

For me, the car really doesn’t feel like mine until I’ve had a chance to clean it really good – so I’m glad I finally got that chance today.

Ok, here’s the before picture: 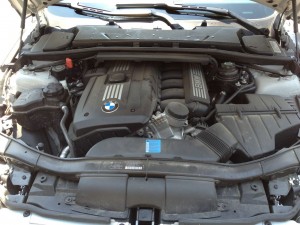 It’s a little dirty but not too bad at all. It’s a 2009 and I got it from the dealer back in October, so it was clean back then. It has been one winter, though and it’s due for a cleaning. Everyone should clean under the hood of their car at least once a year. I like to do it in the spring and then in the fall so that it’s clean going into winter.

Some Tips for Cleaning Your Car’s Engine

1. The Car Should be Cooled Down

First, do it when the car has had a chance to cool down. You don’t want to be digging around there when it’s been running and everything’s hot or you’ll burn your hands. Give it at least a half hour to cool down. Lift the hood to help it cool faster.

When a mechanic works under the hood of a car, they wear gloves. They do this to protect their hands. You’ll be doing the same thing. Working under the hood is not the same as cleaning the outside of the car where everything is smooth. In the engine compartment, there are a lot of rough edges. In fact, I remembered this tip or thought of it after getting a small cut on my hand within the first few minutes. I didn’t have gloves with me, so I made sure to wrap the towel I was using around my hand more to protect it.

3. Start with a Damp Cloth

I like to start with a damp towel or cloth – it’s usually the one I used to dry off the car after I just washed the outside. Start with the area around the hood and the underside of the hood itself. Dirt leads to rust, so get all the dirt off that you can. I then tackle the other parts that seem dirty.

4. Armor All is Your Friend

Next, use some Armor All (protectant) on a cloth. I like to either spray it on a cloth and then apply it or use the Armor All Wipes. Spraying Armor All liberally everywhere under the hood isn’t such a great idea because it’ll spray in more places than you can clean and you’ll be left with white spots in places you can’t get to. It’s not like spraying it on the inside of a door where you’ll be sure to wipe it all off. You have to be a bit more careful.

I’ve never seen this before but in my car, there was a filter that was full of debris. It’s a filter, apparently, for all the rain and junk that falls from your windshield and drains down. Since it’s pretty safe to say that BMWs are over-engineered, they felt it was necessary to include a filter to catch some of this debris so that it didn’t go further into the vehicle. It was easy enough to lift out the filter and dump it out, so I did that.

Your car may have something different to catch debris. If not, check in the area where the windshield meets the engine bay and clean out all that you can. Maybe use a wet vac if you have one to really get in there.

Here’s the after picture after I did my work: 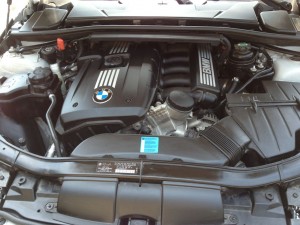 I’m pretty happy with the results. It needed it – especially getting the leaves and junk out of the area by the windshield.

How to Properly Degrease the Engine Compartment

OK, I’ve had a number of cars that weren’t quite as clean as my 2009 BMW. The cars were older and more dirt and grease had accumulated under the hood and it was enough where just using a cloth and some elbow grease wasn’t going to cut it. In that case, you either need to do some degreasing or steam cleaning.

Know What to Cover

Not everything under your hood is meant to get wet. You can’t just get a hose or sprayer and start spraying. You’ll most likely get water into the distributor or something and then your car won’t start.

Here are the things to cover up:

Use plastic bags with rubber bands or tape to completely seal them up.

For this part, it actually helps to have a warm engine. This will help loosen things up. Run the car for a bit or take a short ride somewhere.

Before applying degreaser, give the engine compartment a little spray down to get things wet. Don’t use high force or a lot of pressure. Just get things a little wet so that the degreaser can use that water.

You can find citrus engine degreaser about anywhere – try Wal-Mart or a local auto parts store. You can get a spray bottle or even a gallon or so of it, depending on how dirty things are. You just don’t want to be in the middle of this project and then have to go get more, so make sure you get enough.

Spray the underside of the hood. Get all the areas that you can. Spray it on liberally.

Next, spray the engine area. Again, use quite a bit of it.

After spraying it, you’ll want to give it some time to work – enough where it soaks in but not so much that it dries up. During this time, you can help it work by using a brush (tire/wheel brush or something – even a scrubbie sponge) and working on whatever areas you can. If it starts to dry up, then spray more degreaser on. Do the underside of the hood and parts in the engine – everywhere you can reach.

Next, hose down all areas to remove the degreaser. Give it a very good rinse. Don’t use high pressure as you may force water into places it should not be. Let the degreaser do the work.

You can let the car air cool for a while now. Take the plastic bags off. Leave the hood up. Let it dry for hours. Use a towel to clean areas that you had covered up. In the video I have below, the guy used a leaf blower to help dry out the engine compartment – that’ll probably look a little strange but it’s actually a pretty good idea.

Now you can go about using Armor All to make all the hoses and plastic parts look great. Armor All also helps keep the hoses in good shape so that they don’t dry out and crack – so yet another reason why doing this once a year is a good idea.

Another way to clean your engine compartment is to use WD-40. What WD-40 does is displace water and helps to prevent corrosion. It does help to get things cleaner. Spray it on, then use a brush to clean it and then wipe off the area with a microfiber towel. WD-40 works very well and professionals use it to clean under the hood.

When I had my Acura, I found a guy that did some cheap body work and paint touch-ups. He had a buddy that did engine steam cleaning. It was $100 but I thought what the heck. WOW, did it look good when he was done. The car looked brand new. I was impressed! Here’s a picture: 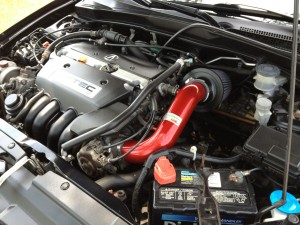 The nice thing about steam cleaning an engine is that it goes deep and clean everything really well. You get a good clean that just can’t be done with a rag in your hand.

If you have the equipment and know how to do this well, I bet you could start a side business steam cleaning engines. Like I said, I thought it was worth $100. Maybe it takes an hour – that’s good money.

Here’s a guy steam cleaning an engine – he didn’t cover any parts up, so do not do it exactly like he did:

Yes, cleaning under the hood of the car can make a huge difference. This can help a lot if you’re planning on selling the car. Heck, someone could flip vehicles really easily by buying cars that people haven’t detailed, clean them up good and then sell them for a thousand or two more. It makes that much of a difference. So why give someone else that chance? Clean your engine compartment yourself or hire a professional to and pocket the extra money you’ll get selling your car.

If I missed anything, please leave it in the comments below. Don’t forget to tell others about what is on this page and share this article.